It is well-known that the earliest professional engineering education in Hong Kong was provided by the University of Hong Kong (HKU) before World War II, but pre-war records of the University were mostly lost. Fortunately, Prof Cades Alfred Middleton-Smith, the first dean of engineering, was a prolific writer and his accounts of the early days of the University have become increasingly available electronically. Using the names of Prof Middleton-Smith and the University as keywords, the present author performed a search of sources such as the Institution of Mechanical Engineers (IMechE) archives and the Grace's Guide to British Industrial History and identified a wealth of interesting materials about this historic gap.

The beginning
In May 1912, Prof Middleton-Smith, associate member of IMechE and assistant professor (equivalent to reader nowadays) of the East London College (nowadays Queen Mary College, London), was appointed dean of engineering of the newly opened HKU. On 22 July 1912, already using his new title 'Professor of Engineering, Hong Kong University', Prof Middleton-Smith applied to IMechE for full membership (Figure 1). A remark, "Passed M 27/9/12" written on the application form suggests that on 27 September 1912 he was formally elected to MIMechE, the highest grade of membership of the institution at that time, which was also the only professional qualification he held throughout his career.

In October 1912, teaching began at the University1. The Faculty of Engineering in those days offered the degree of BscEng in civil, mechanical or electrical engineering2. Four years later, in June 1916, the first batch of engineering students graduated and their papers were sent to the Imperial College for assessment3. Foo Ping-sheung (civil; he later became China's ambassador to Moscow) secured first class honours and two other graduates, one civil and one electrical, received second class honours. This was how honours degree classification was introduced to Hong Kong.

Earlier that year, in 1916, when the first batch of students were still studying in their final year, Prof Middleton-Smith made an application to IMechE to seek recognition of HKU's mechanical engineering degree. Archived minutes of the IMechE Council Meeting on 14 April 1916, recorded the following entry4: "(Min 75) That an application from the HKU, for their matriculation examination to be included in the list of examinations exempting from the graduateship examination (of IMechE), be declined."

That is, the attempt failed. A year later, in November 1917, Prof Middleton-Smith made a renewed application, and the matter was referred to Sir Dr William C Unwin, past IMechE President of the preceding 1915-16 session, for assessment (minutes 147 of IMechE Council Meeting in 19175). The result of this assessment can be found in the Council Minutes a year later on 13 December 19186: "(Min 192) That the matriculation and mechanical degree examinations of the HKU (Min 147, 1917) be recognised as exempting from the corresponding institution examinations."

This was the first record of recognition of an engineering degree in Hong Kong by a professional institution. In the same year, 1918, HKU also graduated its second first class honours graduate, Mr Liu Chen-hua7, who was also Mechanical's first. Mr Liu later became a member of the Chinese Academy of Sciences, a highly respected scholar and educator in mechanical engineering and a vice-president of Tsinghua University. 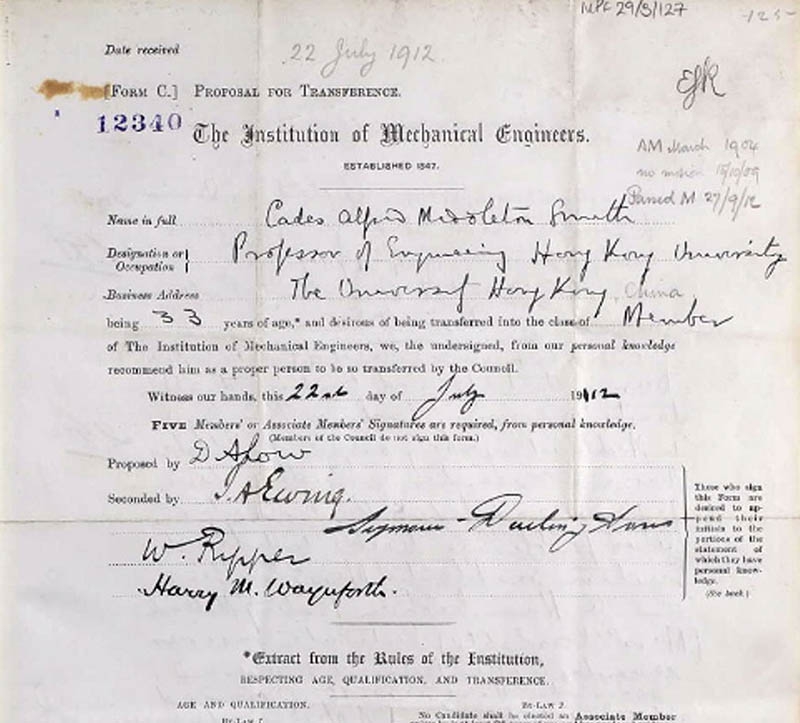 Pre-war developments
Within the first few years of the University, various engineering laboratories had already occupied the most prominent parts of the Main Building (Figure 2)1, 3, 8-11. As one walked into the Main Building from its central entrance in that era, the wing on the left was the Strength of Materials and Applied Mechanics Laboratories, and that on the right the Electrical Technology Laboratories. Ascending the central stairway leading to the Great Hall (today's Loke Yew Hall), the entire floor on both sides housed various engineering laboratories including those for mechanics, electrical machinery, chemistry and physics (part of the Engineering Faculty then), and a large drawing office facing Victoria Harbour for students to practise engineering design (Figure 2).

Walking towards the back of the Main Building on the same floor, there was also a machine workshop and a fully functioning power station that contained various gas and oil engines for supplying electricity to the entire university, and both facilities were manned by staff and students of the Engineering Faculty. Next to the Main Building, on a site where today's East Gate stands, there were a group of smaller buildings for steam and hydraulics laboratories, which were converted from a previous government pumping station. In 1925, to cater for the faculty's expansion, the Ho Tung Workshop was opened on Pokfulam Road, which housed a state-of-the-art machine-shop training facility for engineering students12. Another engineering building erected pre-war was the Peel Laboratory in 193413. 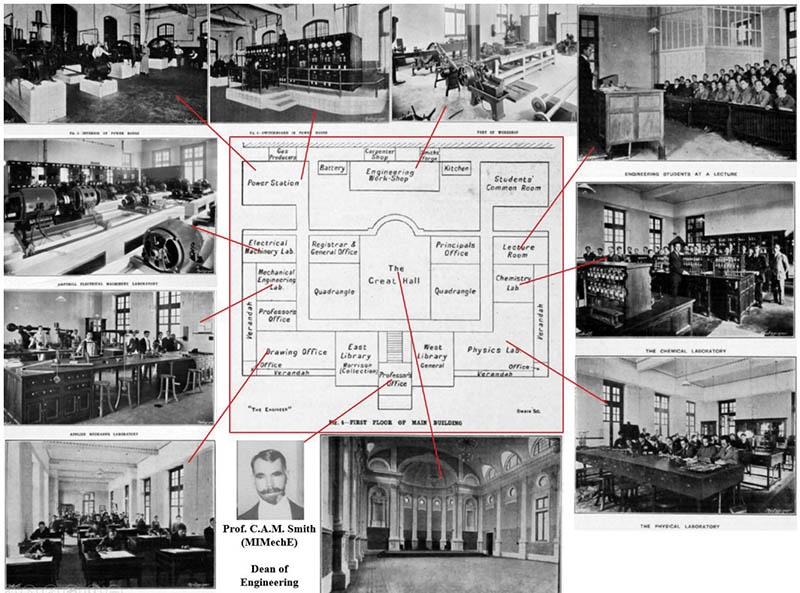 Figure 2: Engineering laboratories in HKU's Main Building ca 1912-18, composed from images in references 1, 3, 9 and 10, available at Grace's Guide to British Industrial History (gracesguide.co.uk). Image of Prof Middleton-Smith, aged 33 in 1912, is by courtesy of the University Archives, University of Hong Kong.

From the beginning in 1912 to the outbreak of war in 1941, the Faculty of Engineering produced 340 graduates, of whom around two-thirds were civil and one-sixth each were mechanical and electrical. As for IMechE recognition, it is not apparent that regular checks needed to be conducted as in today for the recognised status of a degree to continue, and searching of the pre-war IMechE archives revealed one further record of continued recognition in 192414. A surviving University report in the late 1930's15 indicates continued recognised status of the mechanical engineering degree as exempted from the entrance examinations of IMechE and, in addition, the electrical engineering Degree was similarly accepted by the Institution of Electrical Engineers, probably due to the MIEE qualification of Prof M H Roffey, professor of electrical engineering during 1921-41. In the pre-war era, no ICE or IStructE qualifications could be noted on the staff list of the faculty and the programme in civil engineering was not on the accredited list of these two UK institutions16.

Interruption by war
The University's premises were badly looted during the war and all the engineering equipment that Prof Middleton-Smith acquired were seized by the Japanese. After the war, civil engineering was restarted as soon as 1947 as a combined school with architecture, housed in a cluster of buildings along Pokfulam Road comprising the pre-war Ho Tung Workshop and the Peel Laboratory; and a Duncun Sloss School opened in 1950. The civil programme gained accreditation status, for the first time, from the Institution of Civil Engineers in 1955 and the Institution of Structural Engineers in 1956. In 1958, P S K Fang (uncle of Anson Chan) was appointed lecturer to assist in the revival of mechanical engineering17, and in the University's Golden Jubilee in 1961, the Department of Mechanical Engineering was formally re-established with Mr Fang being the first head18. In June 1962, full accreditation status was once again given to the degree in mechanical engineering by IMechE.

He was conferred an LLD by the University on his retirement in 1939, and he died in England in 195120. The only place within the University that bears his name nowadays is the staff quarters, Middleton Towers, but few people know the origin. The early engineering buildings along Pokfulam Road have long been demolished, but fortunately, the Main Building, which once housed Hong Kong's earliest engineering faculty, is a declared monument protected by law.

About the author: Ir Prof Alfonso H W Ngan is the head of the Department of Mechanical Engineering, the University of Hong Kong.